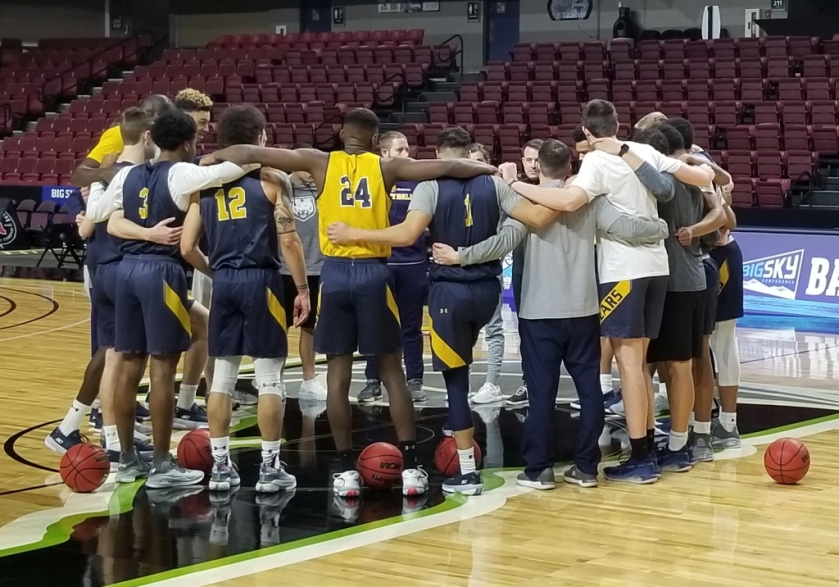 March 14, 2020 Troy "The Voice of the Bears" Comments Off on Silence of the Virus

This might be the last picture of @UNC_BearsMBB on the court this season. #bigskymbb 😮

I’ll admit here: I’m not a fan of the word “surreal”. I think it gets overused for things that aren’t, much like “ironic” does. So, I’ll not call what occurred Thursday as surreal. Instead, I offer: unprecedented. Overly odd. Strange. Dramatic.

The photo above was taken as many I have over the past few years: as the team wraps up its shootaround, usually on the road, I snap a photo of the huddle. As the coaches offer their final thoughts on the session–practice or just shootaround–the Bears huddle this way, as a team.

As shootaround was going on Thursday morning in Boise, it was the activity outside the boundary lines that made this such a different day.

Jeff Linder and I had talked about the likelihood that the game against Southern Utah wouldn’t take place or would without there being a crowd in place. All of the moves made Wednesday related to coronavirus fears had everyone sensitive to what may be coming from the Big Sky’s President’s Council, which was meeting as the team held its 30 minute session at CenturyLink Arena.

Yet, the Bears were still going through their usual gameday prep on the floor in front of me. It was as if everyone was trying to hold off what felt inevitable. Just before 10 o’clock, UNC left the floor and headed to the bus for the hotel. Idaho State would be on the floor after Northern Colorado and there were wishes given between coaches, acknowledgements by players of each other, the usual interactions when you run into another team in such a situation.

In each moment, it seemed like it was all about to slip away.

A chance at the NCAA tournament. A Big Sky tourney title. Retribution for a loss to Southern Utah in the 2019 quarterfinals. Another chance at Montana, then one at Eastern Washington.

The Big 12 cancelled its tournament before the bus arrived back at the hotel.

Players and coaches gathered in a conference room for breakfast. There was the usual conversation and joking around, yet, it felt like everyone was keeping up appearances.

The  Pac-12 made it’s announcement.

The coaches and support staff table was full of conversation over what we were watching happen on social media. The players weren’t saying much about that, but they had their phones out, too.

Then an administrator walked into the room, nodded to Linder and they walked out together.

That was it. The confirmation no one wanted to hear, but knew was coming down the line.

Linder moved to the middle of the room to address everyone. One player said “Not this, not here, man.”

The room was silent in the following minutes. Other than Green confirming flight plans back to Denver that afternoon, very little was being said. Everyone was just trying to fathom what had happened.

Three seniors saw their season end in the most awkward way possible–sitting in a meeting room, being told a virus had effectively ended college basketball for the year.

The team arrived back in Greeley 30 minutes after what would’ve have been tip off time for their quarterfinal game in Boise.

A few hugs, handshakes (virus be damned) and a reminder that there would be a team meeting at 11 the next day as a post-mortem.

And it was over.